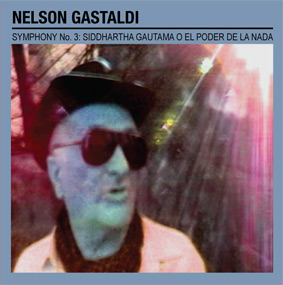 When psycho-spatial composer Nelson Gastaldi passed away in 2009 at the age of 77, he left behind a unique musical legacy that is only now beginning to be unveiled. A self-described “musical nihilist with noble and mystic origins” (as well as an accomplished visual artist), Gastaldi supported himself and his family with a job at an electric company in Buenos Aires, Argentina, while creating an astonishing body of work that went virtually unheard during his lifetime. Synthesizing his wide-ranging interests (medicine, linguistics, Chinese and German philosophy) into his music, he welcomed paranormal / initiatic experiences into the compositional process, creating homemade Sibelius-meets-Sun Ra symphonies. The only previous publication of his work was in Bananafish magazine, which featured an excerpt of Symphony No. 3 on an accompanying CD. The same issue also contained his sole English-language interview, in which he waxed: “The human being runs at the side of a river. When he is young, he runs faster than the river; in mid-life he runs at the same speed as the river; and at last he falls down and the river keeps going.” Take a dip into the strange and beautiful river of Nelson Gastaldi. Download coupon included.

Bananafish has kindly allowed the interview with Gastaldi to be accessed here.

“Argentinian outsider composer Nelson Gastaldi (1932-2009) comes across like a character from a Borges story, or maybe Don Quixote himself. ‘I’m a musical nihilist with noble and mystic origins,’ he confided in his one and only interview to Bananafish magazine. ‘I’ve experimented with pure sound — the crepitations of a fried egg, for example. Besides timbral explorations of specific objects, I have employed techniques like composing aleatory music based on feeding doves, listening to music inside dreams, and using numerology as a compostional tool.’
When Reynols member Roberto Conlazo met Gastaldi in Buenos Aires in 2003, he was astonished to behold him compile symphonic works using small cassette recorders and Casio keyboards, lots of toys, Chinese mechanical birds and a trumpet. Gastaldi clearly had colossal musical ambition, unconfined by his extremely limited resources: this is a symphony in three movements conceived along 19th century lines but with 20th century concerns such as micro- and polytonality stirred in. It takes a moment to adjust to his sound — lo-fi Bruckner with synth marimbas — after which it’s easy to be swept along.
The start of the second movement is orchestral, courtesy of Casio: strings hand over to brass, tympani crash in, but Gastaldi’s more emotional moments are even stranger, a ‘lost in space’ gamelan — and is that a wailing baby who has somehow made it onto the tape? Presumably he was constantly rerecording from machine to machine, so room sounds creep in and the whole work acquires a strange patina only possible in Gastaldi’s hyper-analogue world. As the composer himself put it, ‘With music there is always the possibility that you will fly.’ ” – Clive Bell, The Wire

“The story goes that a cab driver in Buenos Aires once threatened bandoneon player and Nuevo tango composer Astor Piazzolla for his crimes against the tango. He might given himself the ceremonial Mohawk and gone totally Travis Bickle if he’d ever gotten Nelson Gastaldi into his car, because Gastaldi does things with this symphony that you just shouldn’t do. The most noticeable transgressions are instrumental. Gastaldi, who died in 2009 at the age of 77, never released an album and never got an orchestra to perform his music throughout his life. He got around these barriers by performing and recording his music himself using bicycle wheels, wind-up toys, and a pneumatic hammer. Symphony No. 3: Siddhartha Gautama Or The Power Of Nothingness, his first recording to obtain commercial release, is relatively conventional; the strings and brass are supplied by Casio keyboards, the percussion by what sounds like a toy xylophone, and the bird cries by one of those wind-up toys. On first listen it sounds a little bit like late-‘60s Sun Ra, mainly because of the murky recording (Gastaldi used Sony black box cassette recorders and normal bias tape), but also because of the music’s outsized drama. Once you get past the recording quality, the piece’s links to 19th century orchestral music are pretty plain. If this symphony is anything to go by, Gastaldi got off the bus before Webern got on; there’s not a lot of dissonance beyond that generated by his crude tools. But neither does it proceed on a path towards conventional development and resolution. Rather, it’s discursive, elaborating on melodic notions, then revising them, then jumping to some other idea that seems like a footnote but changes the scene like clicking on a hypertext link. Roaratorio, a label that still flies the Rodd Keith flag with pride, seems like a good home for this music, and they’ve treated it well; it comes on clean black vinyl, the sleeve looks suitably paranormal, and it comes with a download coupon for those late night walks in the park. Oh, while Gastaldi never got to conduct an orchestra, he did jam with Reynols, whose Anla Courtis supplied Bananafish magazine with a mind-bending interview with the maestro in issue 18. You can read it here: ( http://roaratorio.com/616-2)- Bill Meyer, Still Single

“A DELIGHTFUL AIRSCAPE. I RECOMMEND IT FOR ALL LOVERS OF EXPERIMENTAL COMPOSITION.” – Grant Hart