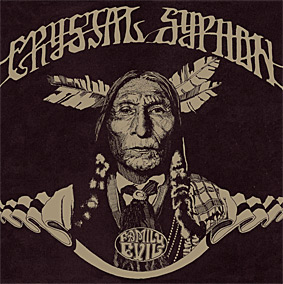 Crystal Syphon, one of the greatest “lost” groups of the West Coast psych scene, came together in Merced, California in 1965. Originally a Beatles / Byrds-influenced unit called the Morlochs, they soon shed their original moniker and moved in a more psychedelic direction, becoming a fixture on the ballroom circuit from 1966-1970. Although their music may nod in the direction of the New Tweedy Brothers and Quicksilver Messenger Service at times, it’s imbued throughout with a distinctive sound that arose from practicing up to six nights a week. The band entertained offers from various labels during their existence, but as they insisted on complete artistic control and ownership of their music, no deals were struck. Now, some 44 years after its creation, Roaratorio is proud to make the music of Crystal Syphon available for the first time ever. Drawn from studio tracks, rehearsal tapes and a live recording from the Fillmore West, Family Evil features cover art by Norman Orr and extensive historical liner notes in an old-style “tip-on” jacket. Digital download included.

8/10 : “…unlike many of the scene’s almost-rans, Crystal Syphon had great songs on their side, borrowing the best moves from primitivist garage energy, adding the glass-spun guitars and the warp and weft harmonies of The Byrds, and then dosing further with just the right amount of psychedelics. Particularly staggering are several longer cuts, like “Fuzzy And Jose” and the live “Winter Is Cold,” where the quintet stretch the songs with sinuous organ and needlepoint guitar solos that are period-piece perfect.” – Jon Dale, Uncut

“This is amazing. I’m way past believing that everything of worth has already been mined – I’ve been surprised too often. However, Merced, California’s Crystal Syphon represents a true lost West Coast gem…I’d hate to curse the disc with over-enthusiasm, but you really should own this.” – Paul Martin, Shindig!

“If you thought the sixties gold rush was over, think again. Someone just hit an unexpectedly deep seam of pure California gold…The quality of the songwriting, the vocal harmonies and the musicianship throughout this 10-song set is first rate…Everyone I’ve played this record for has same reaction: WOW! How come I’ve never heard this before?!” – Mike Stax, Ugly Things

“Family Evil is a ‘lost masterpiece’ that actually lives up to the hype — an LP that deserves a space next to the other classics of the era on your shelf — Quicksilver’sHappy Trails, the Dead’s Anthem of the Sun, the Airplane’s Bathing at Baxter’s and the first Moby Grape release.” - Aquarium Drunkard

“…will not disappoint SF obsessives who thought they’d heard it all.” – Richard Morton Jack, Flashback

“Family Evil is a very cool archival release by an all-but-unknown quintet from Merced, California, recorded in ’67 and ’68. Their sound has shades of Quicksilver, Kak, and the Youngbloods, with stinging quavery guitar leads winding through downer-blues-moves and neo-pop vocals. Considering what a signing frenzy there was in the Bay Area at the time, it seems odd these guys never even did a single, but this LP was worth the wait.” – Thurston Moore & Byron Coley, Arthur

“America’s great lost acid rock band. Who knew California band Crystal Syphon had an album’s worth of material sitting in the can waiting to be heard by 60s psych rock fans? This has to be not only one of the best reissues of 2012 but also one of the best classic rock discoveries of the year…Does the music live up to the hype? You bet. The earliest tracks have a rawer sound than the later material which is clearly influenced by big time S.F. bands Quicksilver Messenger Service, The Grateful Dead and Jefferson Airplane. ”In My Mind,” recorded in 1968, sounds like a lost outtake from the first Quicksilver album. The deep vocals and vibrating guitar work proudly display Crystal Syphon’s influences. No matter, it’s an excellent track that could have easily made any psych compilation you care to name. ”Marcy, Your Eyes” and “Paradise” two of the earliest cuts from 1967, have thick garage fuzz, naive teen vocals, and cascading acid guitar work – outstanding. The last 15 seconds of “Paradise” are especially great. The group starts playing eastern scales and just when you think they are about to explode into the most intense solo you’ve ever heard the song ends. Other highlights are the menacing acid rock of “Fuzzy and Jose,” “Family Evil” and “Winter Is Cold.” These cuts are longer, slow paced and closer in sound to Jefferson Airplane and Quicksilver Messenger Service – lots of acid guitar work, creative arrangements and spacey vocals. ”Try Something Different” is another earlier cut with a lilting folk-rock sound that recalls Buffalo Springfield in it’s guitar figures. Every cut on Family Evil is worthwhile. There’s nearly 50 minutes of great psych rock here – so not only a significant discovery but an absolute must own for any 60s rock fan.” - The Rising Storm