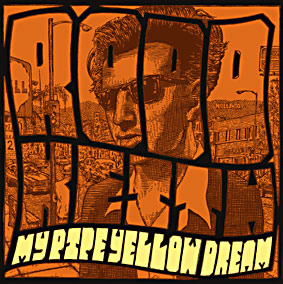 Add a copy of Rodd Keith’s Saucers In The Sky CD for an additional $4 :

“Song Poems Wanted” read the ads. “We need new ideas for recording!” The send-us-your-lyrics business was a borderline scam, taking whatever lyrics came their way from would-be songwriters and – for a fee – setting them to music. None of the results ever came close to being a hit, and to be sure, the vast majority was sufficiently bland or clumsy to insure no great karmic loss in their instant obscurity and miniscule press runs. But Rodd Keith – the late, great genius whose prolific output was almost completely confined to the song-poem industry – had a knack for turning sow’s ears into silk purses. The nature of the business required him to work quickly, with no second takes, and his skill at writing and arranging on the fly was not unlike that of a master improviser. When at his best, he put his unique musical stamp on some lucky customer’s submission.

My Pipe Yellow Dream is the second Roaratorio anthology of the highlights of Rodd Keith’s work. Compiling fifteen previously unreissued songs from 1966 through his death in 1974 – including a never-before-heard cover of “Choo Choo Train” – My Pipe Yellow Dream showcases the full range of his talents. From exquisite mid-60s pop balladry (“Deep Velvet”) to blue-eyed soul (“You Don’t Have To Alibi”) to folk-rock (“Tired Of Waiting”) to solo Chamberlain creations (“Red Sports Car”) to gospel testifying (“O Jesus My Savior”) to a pair of patriotic screeds (the all-spoken word “America The Not So Beautiful” and the bizarre-world lounge funk of “Search Out Your Soul, American”), this collection continues the rehabilitation of Rodd Keith’s recorded legacy from thrift-shop throwaway to celebrated cult artist.

“Rodd Keith owned a broad command of popular and sacred styles, a gift for creating ingenious arrangements, and an expressive singing voice at the service of people who thought that the word “alibi” is a verb and that the phrase “my pipe yellow dream” should be the climax of a chorus… The tension between Rodd’s skills and the rank amateurism of most of his material is just one of the things that makes My Pipe Yellow Dream compelling.” – Bill Meyer, Dusted

“Buried at the back of tabloids some 30 or 40 years ago, advertisements would beseech readers to “Send us your lyrics!” For a small fee, musicians would craft a tune around these amateur lyrics with the unrequited promise of stardom and fame. More often than not, the results are dreadful. But Rodd Keith proved to be the exception with his deft arrangements cobbled from contemporary fads laced with a baroque pop bombast. My Pipe Yellow Dream is the latest in a sporadic campaign to collect the deliberately disposable songs from Keith. As with much song-poem anthologies, the lyrics tend toward the fringes of the contemporary psyche with crackpot politics and philosophies displayed nakedly next to pleas from the perennially love-sick. Keith worked all of these into rock ‘n’ roll ditties, funky soul numbers, Mitch Miller croons and folk balladeering with remarkable panache. “Bury Me Deep” could have been a hit, swooning in step with Herman’s Hermits with an unexpected coda from a quadruple timed arabesque on the lead guitar; and “Choo-Choo Train” suitably rolls along with Shelby Singleton’s swaggering take on the Nashville sound circa 1968.” – Jim Haynes,The Wire

“Rodd Keith was an excellent if left-field arranger and composer, sure, but he also imbued strangers’ potential missteps with a range of feelings, and that impulse comes from somewhere equally special.”- Clifford Allen, Tiny Mix Tapes