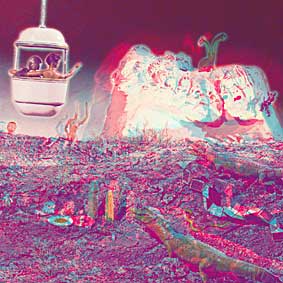 Formed in Minneapolis in 2004, Knife World have converted many unwary bystanders into true believers through their frenetic gigs in underground venues and the occasional club. The band worships at the Riff Temple, swapping pomposity for a mischievous intelligence. Guitarist Jon Nielsen plays as if part of some skewed arena-rock mashup, while drummer Josh Journey-Heinz avoids the obvious backbeats by carving out the spaces around them instead. Together they have a fuller sound than most groups with more appendages. A self-released cassette and a cd-r served up hints and guesses, but now their debut LP comes along to deliver the goods. Packaged in a pleasantly eye-gouging 3D gatefold jacket, with glasses mounted into the vinyl.

“Hey hey, another rock duo wailing away at the withering wall of guitar / metal / prog semantics — though Knife World, from Minneapolis, might possess what it takes to knock this hackneyed structure down. There’s a great deal of technique in here, and not the sanded-down, ’80s thrash-sphere thrown at you by the Fucking Champs, but the sort of wildman ’70s base jumpin’ meth-blues you might hear on any number of champion live records from the era… A record I am not gonna forget for a good long while.” – Doug Mosurock, Dusted

“Jon Nielsen’s overdubbed guitars careen across Josh Journey-Heinz’s frantic, top-heavy percussion, a blast of proggy overload executed with feral intensity. The riffs and percussive attack are jagged but never overly complex; there’s no distraction from the intensity of the forward motion — the record pretty much hurtles through space…” – Clifford Allen, Signal To Noise

“…this is rock in a mode which reminds us of classic-era oddball indie stuff of the SST / Homestead era…the playing is defiantly expert and filled with non-generic psych moves and references.” – Byron Coley & Thurston Moore, Arthur

Best Rock Band of 2009 award : “From the deepest, dankest basement party, where the cologne of old sweat and spilled beer drifts like mustard gas, to the 7th St. Entry stage, where their fans pay a cover and buy their beer from the bar in a show of good citizenship, the indomitable rock outfit Knife World knows no master. Bound only by the limits of imagination and the technological capabilities of six strings, an amp, and a handful of drums, Knife World’s compositions are the soundtrack to a Klee canvas, where everything is savage elegance and delirious Technicolor. Wildly adventurous but disciplined, an abandonment of form that never loses composure, Knife World is at once a reduction of and an elaboration on everything classic in the American rock catalog.” - City Pages