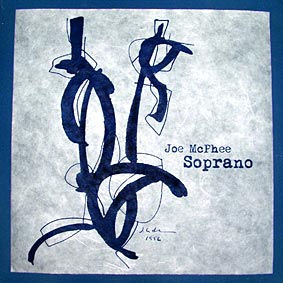 A document of Joe McPhee’s first solo concert devoted exclusively to the straight horn, Soprano is both a companion volume to his previous LP for Roaratorio (the critically lauded Everything Happens For A Reason) and a follow up to his classic album Tenor, which raised the bar for solo saxophone music over 30 years ago. Recorded live in St. George’s Church at the Guelph Jazz Festival in 1998, Soprano was inspired by Pauline Oliveros’ Deep Listening performance at the venue the previous year. The acoustics of the church provided a natural web of reverberation and delay, and compose as much a part of the sonic palette as Michael Overhage’s farmhouse did for Tenor. McPhee’s art is informed by the head and the heart in equal measures, and Soprano is thoughtful, passionate music from one of jazz’s most eloquent practitioners. A limited edition of 553 copies on 180 gram vinyl, with a Judith Lindbloom silkscreen print on rice paper and liner notes by McPhee and Oliveros.

A special lettered edition of 26 copies, with hand-painted covers by Judith Lindbloom, signed by Joe McPhee, can be seen here. <sold out>

“The musicality encountered in each of the four pieces transcends any quotidian meaning of the word… The shape of [Mcphee's] ideation is direct; the underlying message is deep and the beauty of the music, awe-inspiring.” – Lyn Horton, All About Jazz

“Hearing this lovely recital, it’s hard to believe this one sat for nearly a decade… fantastic stuff.” – Jason Bivins, Cadence

“…this album is a wonderful souvenir of Joe’s playing at his most mesmeric and spatial. The way he interacts with the natural acoustics of the chapel is spell-binding.” – Byron Coley & Thurston Moore, Arthur