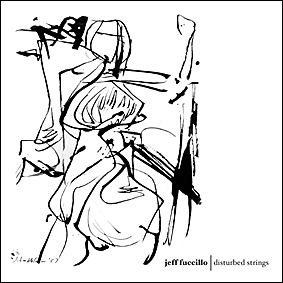 In the spring of 1998, guitarist Jeff Fuccillo (Irving Klaw Trio, Wham-O, Hochenkeit) met avant-folk guru John Fahey while opening for his trio at a gig in Portland, Oregon. Fahey was sufficiently impressed, and booked studio time to record Fuccillo for his label. On the day of the session, Fuccillo arrived prepared to make a solo acoustic guitar album. To his surprise, Fahey had brought along a pile of samples — random snatches of music, all manner of sound effects — and without warning, began shooting them out into the studio room through the monitors, effecting a guerrilla collaboration of sorts. Disturbed Strings captures the highlights of that day: veering from hardscrabble stringrattling to modal melodicism, the album is ample testament to Fuccillo’s wide-ranging inventiveness as an improvising guitarist, as well as a window into an aspect of Fahey’s artistry not previously represented on record. Released in an edition of 542 copies, with artwork by Fahey and Judith Lindbloom.

“Damn, what a great record!… The hepness of the way this guy bends and hammers strings makes it impossible to peg stylistically, seeming as it does, to owe equal debts to Derek Bailey, Robbie Basho and Jandek.” – Byron Coley & Thurston Moore, Arthur

“…an enticing introduction to Fuccillo’s ‘solo’ art, and something that Fahey completists will need to own.” – Brian Olewnick, Bagatellen