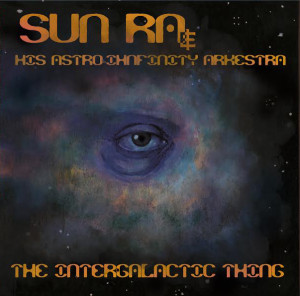 One might think, with a discography as extensive as the one Sun Ra boasts, that the scope of his work has been fully apprehended by this point, but The Intergalactic Thing demonstrates its seemingly bottomless depths. This is not a complete surprise: anyone who saw Ra and the Arkestra perform will remember the sight of the band quickly shuffling through an imposingly thick stack of sheet music, when Sunny would call the next tune on the program with an encrypted hint on his keyboard. Band members tell stories of spending long hours practicing a newly-written composition, only to never play it again. Here, we have a taste of what’s been hidden: drawn from rehearsals at the Sun Ra house in Philadelphia from 1969, The Intergalactic Thing introduces a dozen never-before-heard pieces from Ra’s songbook – tunes that may have never even made it to the bandstand, let alone the recording studio – along with a handful of reworkings of such Ra classics as “Spontaneous Simplicity” and “The Exotic Forest.” Without a doubt, this is one of the most important augmentations to the Sun Ra catalog in many a moon. This double LP set comes in a beautiful gatefold jacket, with extensive liner notes by Ra discographer Robert L. Campbell and a download coupon for the full album.

“The Others From Another World”


“Discipline Of The Pharaohs”


“Sun Ra capitalised on The Arkestra’s communal living situation by having them practise at all hours, waking them up to play arrangements and tunes that he never called on the bandstand. The tape recorder ran nearly the whole time…and the stash of unissued material is so deep that solid collections like The Intergalactic Thing are still coming out nearly a quarter of a century after Ra’s demise…’The Others From Another World’ is so challenging that it might have existed mainly to keep the band on its toes. Brass, reeds and organ chart three related but separate courses that come together like some Ives-ian big band experiment. The splendid ‘Discipline Of The Pharaohs’ prefigures the numbered ‘Discipline’ series with both its title and its interlocking riffs, but the way the beat is distributed across congas, reeds, and Farfisa make a case for this being a training exercise designed to shake up players’ assumptions about how a rhythm can be expressed.” – Bill Meyer, The Wire