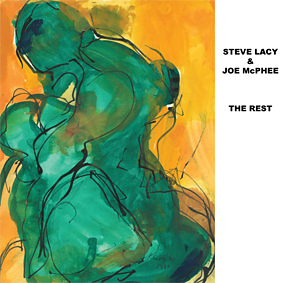 In June of 1977, Steve Lacy and Joe McPhee shared a double bill in Basel, Switzerland. Lacy invited McPhee to join him for a duet to close his set, for which McPhee elected to bring out his own soprano saxophone. The main part of Lacy’s performance was issued on the classic Clinkers LP; after 36 years, here is The Rest. This one-sided, limited LP marks the first and only time that these two master musicians played together, but the simpatico meshing of their distinctly individual voices points towards a shared history on a different plane. Cover artwork by Judith Lindbloom. Download coupon included.

“…their duo is rousing, moving through fragments of Lacy’s tune cycle “The Way” and singsong vortices, ending up in breathy clambers and pinpricks mirrored by ghostly tape flutter. Both players are jovial in conversation and carve out spaces for one another, but their differences in approach are stark — melodic abstractionists and pure-sound improvisers whose understanding of a comparable field results in an obliquely parallel relationship, in togetherness and opposites. The Rest is a fascinating view into the working process of two improvisational architects in their only recorded meeting.” – Clifford Allen, Tiny Mix Tapes

“This 20-minute improvisation shows two stylists of the soprano sax jousting, jabbing, dovetailing and slithering around each other. At times, it sounds as if Lacy is going to go into one of his compositions and McPhee, for his part, holds his own against the master, his more visceral soprano sound contrasting nicely with Lacy’s elegance. This limited-edition, one-sided vinyl is truly an unearthed gem.” – Robert Iannapollo, New York City Jazz Record

“The playing here is far from careful, but it’s also not at all careless. When one reaches for pathos, the other proposes humor, and when one unleashes swift-running sound-streams, the other encircles it with featherweight dubs of breath. If you have an ear tuned to process-oriented improvisation, it’ll find nourishment in this music’s evident state of becoming.” – Bill Meyer, Still Single