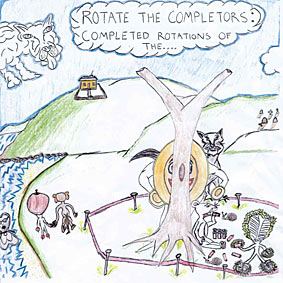 When one thinks of the musical centers of New Zealand, the city of Tauranga doesn’t have as celebrated a history as Dunedin, Auckland or Christchurch.  Which is apt, in a way, as the artist known to us only as Rotate The Completor makes music that sounds unconnected to any scene in NZ or elsewhere.  A chance encounter with an enthusiastic passerby while busking on the streets led to the receipt of a home-recorded cassette, which caught the ears of the outsider music community, although any attempts at personal correspondence with its creator from his new admirers went ignored.  Armed with a guitar, kick-drum, and vocal stylings which wouldn’t sound out of place on an early Residents record, Rotate The Completors: Completed Rotations Of The… is the sound of a one-man band playing at a carnival that’s gone off the rails.  RTC’s other- / inner-wordly songs are a strangely addicting brew of low-fi bedroom pop, proggy loner folk and bouncy children’s music, with such lyrical concerns as beer-stealing cantaloupes, dead albino hedgehogs, and emphatic denials of insanity.  Roaratorio is proud to present Rotate The Completors: Completed Rotations Of The…, newly mastered for vinyl, to a wider audience for the first time.  Download coupon included.

“… a one-man operation, weaving a strangely and achingly beautiful string of songs together without a sense of boundary… You’ll need to tune to a specific wavelength to appreciate Rotate the Completor, as we all weren’t wired the same way as this guy. Savant? Intentional? Little of that matters when you’re sucked inside what must be a very cramped space and this brand of loner lo-fi is throwing the book into the salt air and instead contorting around various spats of prog, blues, nursery rhymes and haunted folk with only guitar and a voice that’s as malleable as those guitar strings. More often that not though, you get the feeling that the man has total control of when he goes way outside and when he reels in it with lilting sincerity. The Sun City Girls come to mind whenever I begin to think about that innate ability of some bands to give you “Smoke on the Water” and flip it over to reveal a grotesque vision of psychedelia unhear, and obviously not created by people who have their mind’s righted. Rotate the Completor has that skill and in repeated listens resemble SCG, if only they were influenced by smuggled copies of Beefheart records and the local ever-presence of beloved weirdos like Chris Knox and the Dead C.” – Kevin J. Elliott, The Agit Reader

“Completed Rotations of the… is a captivating listen. Contrary to preconceived notions of street music as the work of genius or the work of madmen, Rotate the Completor bounces between the two poles with ease. The sporadic guitar melodies, rudimentary percussion, and rhythmic lyrics display a deeper understanding of pop aesthetics. This isn’t cookie cutter cover songs or the random declarations of a lost soul but the concentrated power of a musician connected to musical history without the stuffiness of success seeking; just an honest and insular musician looking to earn a bit of a living with his quirky, warped pop.” – Justin Spicer,Agitated Atmosphere / KEXP Blog

“…Don’t write this off as some product of naive charm, though. In his own eccentric way, RTC can actually play the guitar like a whizz, he’s simply (through a heroic effort of mental splitting, perhaps) pretending that he can’t. He can perform quite intricate and complex melodies, and repeat them, with obvious facility; matter of fact his guitar can often double up the wayward melodies his voice is warbling, as though he were a deformed version of a seasoned be-bop player from the 1940s. In short there is real skill hidden behind a loonish mask of antic disposition. The first songs on the album do resemble some demented variant of home-made rockabilly, but his swell guitar licks soon broaden out into more adventurous areas, played strangely but always with articulation and feeling. The fifth song on Side A (there are no titles we can usefully apply to the situation; buy a copy and you’ll see what I mean) does indeed resemble moments from the most glorious LP of “lost” psychedelic music from the Japanese underground of 1970s. Then on the next track we might find bursts of jazz-tinged riffing, followed by a song enhanced with chordal strums that yield rich plangent patterns. The music is all over the place. This record may feel like a bedroom tape crossed with an odd LP of children’s songs, but RTC might just be New Zealand’s answer to Eugene Chadbourne.
As mentioned, the lyrical content is somewhat obscured by the “mouthful of chewing gum” approach to singing, but the cover art and the brief typewritten (obsessional) texts written on the back do hint at the surreal stories and bizarre images that are part of the everyday fabric of Rotate The Completor’s inner world. Animals, birds, fish, fruit and vegetables are all subject to his peculiar brand of anthropomorphism, and it’s often far from clear if these mental projections are benign, his only friends in an otherwise isolated existence; or deadly enemies, manifestations of his own paranoia. Certain intoxicants (beer and drugs) also feature prominently, probably exacerbating an already unstable mental condition. In all, this is a true oddity with its own distinctive taste which you will either love or hate.” – Ed Pinsent,The Sound Projector