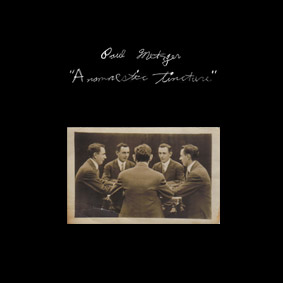 Anamnestic Tincture is a live album by virtuosic musical carpenter Paul Metzger, culled from many hours of concert recordings. Side one comprises Metzger’s public debut on his modified banjo, recorded in 2002 at a former church-turned-underground art space in Minneapolis. One of his most memorable compositions, “After Milo” later turned up as an untitled improvisation on his CD for the Chairkickers label. Jumping ahead six years (and several more banjo alterations later) to side two, the glittering “Orans” gets a workout at a memorial show for the artist Matt Zaun. As an acknowledgment of the occasion, Metzger also gave a one-time-only performance — “Dark Green Water” — on another of his mutant instruments: an acoustic guitar with the body drilled out to accommodate a cymbal set into its face, and ten assorted strings of varying lengths laid over the top, giving it a particularly metallic and dissonant sound.

Anamnestic Tincture is released in an edition of 425 copies, with an original vintage snapshot mounted on each cover; click here to view a gallery of selected photographs.

“Metzger’s music perfectly balances technical smarts with the feel of a life lived, and makes for gripping instrumental art.” – David Keenan, The Wire