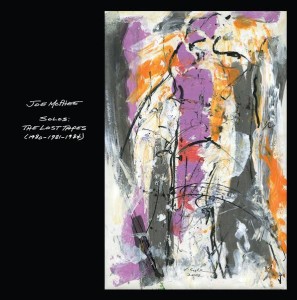 In 1976, Joe McPhee recorded the landmark album Tenor, kicking off a solo period of finding and refining the distinctive voice that continues to inform his music to this day. Solos : The Lost Tapes (1980 – 1981 – 1984) is a collection of material from McPhee’s personal archives that shines new light on the legendary multi-instrumentalist’s work during this time. “Wind Cycles,” for tenor saxophone, explores the permutations of breath on reed and brass, from quiet whispers to full-throated cries and back again. With “The Redwood Rag,” McPhee takes a jaunty melody and gives it a swinging workout with Steve Lacy-like precision. The free-blowing alto excursion “Ice Blu” is, in McPhee’s words, “a sound which evokes an image, which asks a question ‘What is that?’ and the answer is, a sound which evokes an image which asks a question.” “Voices,” one of his signature compositions, gets a particularly haunting treatment here on soprano, with McPhee incorporating various electronics to mesmerizing effect. All together, Solos : The Lost Tapes (1980 – 1981 – 1984) is the distilled essence of one of the most important creative improvising musicians of our time. Cover art by Judith Lindbloom. Includes a download coupon for the full album plus a bonus interview, conducted at the New Music America Festival in 1981.

“Whether it’s amplifying keypad pops or finding harmonics that split his notes into a mass of complex, unfurling tones, he gets you with a feeling as well as a sound… Although McPhee’s music is without compromise, he’s always struck me an excellent gateway figure for people trying to get a handle on free improvisation because the connections between his confrontational and approachable sides is never too hard to find.” – Bill Meyer, Still Single