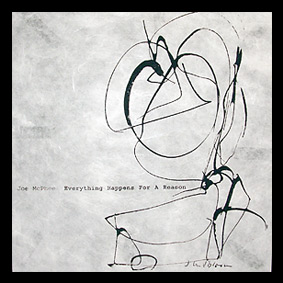 JOE McPHEE
EVERYTHING HAPPENS FOR A REASON
roar09 LP

In the ever-growing discography of master musician Joe McPhee, his solo albums have stood out as supreme ur-texts of his consummate improvising and compositional skills. Joining the ranks of such landmark records asTenor, Graphics, and As Serious As Your Life, Everything Happens For A Reason is an unadorned showcase of this influential pioneer in the world of creative improvised music. Recorded live in Austria in November of 2003,Everything Happens For A Reason features McPhee on pocket trumpet, soprano and alto saxophones. A limited edition of 482 copies on 180 gram vinyl, with a Judith Lindbloom silkscreen print on rice paper and liner notes by McPhee.

A special lettered edition of 26 copies, with hand-painted covers by Judith Lindbloom, signed by Joe McPhee, can be seen here. <sold out>

“…this is a magnificent recording and bountiful evidence of McPhee’s spirit-flame.” – Byron Coley & Thurston Moore, Arthur

“This Roaratorio disc is a thing of beauty…Multi-instrumentalist Joe McPhee ensures that the sounds that emanate from the speakers are equal to the high quality packaging.” – David Dupont, Cadence

“A beautiful addition to the shelf” – David Keenan, The Wire

“['Voices'] is the soprano showcase to pull out when anyone wants to know why McPhee should be permitted to stand with Lacy, Evan Parker, and Roscoe Mitchell as titans of the straight horn…a lovely album.” – Bill Meyer, Dusted