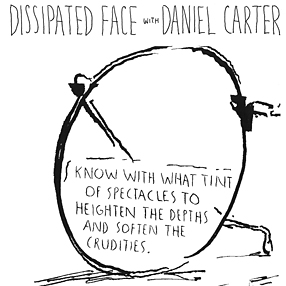 “Not since the early days of MC5 at the Grande Ballroom in Detroit, circa 1968, had there been such an organic melding of sheer metalesque maelstrom and free jazz. These archival recordings from the legendary punk club CBGB capture a moment in time when open-minded musicians from the ‘downtown scene’ were exploring the possibility of bringing Lou Reed’s feedback-infested Metal Machine Music together with Albert Ayler’s Love Cry. Dissipated Face guitarist Kurt “Hologram” Ralske and special guest saxophonist Daniel Carter provided that implausible link between punk rock and avant garde jazz on these 1986 live recordings. Fueled by the throbbing rhythms of Steve “X Dream” Popkin and Ben “Face” Munves, who alternated on bass and drums, Ralske’s twisted, thrashing power chords and shrieking licks blend with Carter’s cathartic alto sax wailing to make the perfect union of disparate worlds.

“Ralske would go on to attain a certain level of indie rock fame with Ultra Vivid Scene and subsequently make an impact as a London-based producer-conceptualist-avant-popmeister and visual artist. Carter
would become one of the most ubiquitous figures on New York’s free jazz scene, recording with William Parker, David S. Ware, Billy Bang, Alan Silva and Matthew Shipp and the cooperative bands Test and Other Dimensions in Music. But for this one moment back in 1986, their paths crossed with bandmates Popkin and Munves, and the results were frighteningly intense.” – Bill Milkowski. Cover artwork by Raymond
Pettibon.

“Don’t let the Raymond Pettibon cover fool you—this ain’t exactly some SST discard that cluttered up the amerindie record collections of the late-eighties! Dissipated Face, although they could have made it as a fringe signing to that infamous label, are a tad different’n the reams of collegeboy experimental bleats that were getting a whole lotta hosannas from cloistered clods like myself. As if you actually knew, Dissipated Face were a hot trio that was romping through the post-fun era of NYC rock back when they laid these sides down at CBGB on July 31st of 1986, and their mix of everything from free jazz and late-seventies avant-prog to punk rock made for some of the wildest mergings of the form since Red Transistor. Nothing as out-there as that group, but better’n many a similar-minded excursion into freedom aesthetics. What’s best is that none other’n noted avant saxist himself Daniel Carter sat in giving a particularly Albert Ayler-ish air to these excursions, so if you were a fan of this guy’s various endeavors on the stage of the CBGB Lounge during the final days of Hilly you’ll be glad to know that he was in on the punk jazz game for a longer time’n you could’ve dreamed!” – Christopher Stigliano, Black To Comm

“Oddball discovery of a live meeting of an early group led by Ultra Vivid Scene’s Kurt Raiske with the always amazing Daniel Carter guesting. Carter’s on sax here, and the blend – right near the end of New York City’s post-SIN Club trajectory – is a very cool collision between free jazz and lateperiod scum-rock readymades. Why was this not known of before?” – Byron Coley, The Wire

“If you’re like me, and you got into standard rock music that had choruses and verses and bridges as a child, but always longed for something more extreme, you probably remember the moment you first heard Septic Death or Albert Ayler or Wolf Eyes or Mr. Bungle or whatever it was that destroyed the musical parameters previously established by your brain. I bet if I stumbled into CBGB’s in 1986, everyone probably would’ve been like “who the hell let a five year-old in here, where are his parents?”, but supposing I was a teenager or something, Dissipated Face probably would’ve cracked my skull open with their flailing, post-no-wave free-rock assault. They sound like one of those early ’80s downtown NY groups like Lounge Lizards or Material or Golden Palominos, had they crashed into Reagan Youth on the cab ride over with the few surviving members improvising live.” - Yellow Green Red

“Frantic free punk, that reminds me of Easter Monkeys, then Flipper, then Pere Ubu… it’s wound up post VU sounds from the streets of NYC when that still meant something, inflections of no wave spurting saxophone and weirdly HC-esque guitars, but the swagger and fuck-you take over and overpower the skronk…It’s reminiscent of MC5′s incursions into jazz, not jam Ginn band shit, but fucked up on PCP Les Dirtbags out for blood, armed with Sun Ra and the Dead Boys. Sick Pettibon cover art too. Eat it or beat it!” – Layla Gibbon, MaximumRockNRoll

“In the mid-1980s, Dissipated Face were one of a number of groups weaned on New Music Distribution Service catalogs, cut-out bins, and ready to occupy something of a vacuum. Punk rock, prog, free jazz, funk, modern composition and Downtown art scum were all part of the landscape and exactly what went into their melting pot. Consisting of guitarist Kurt “Hologram” Ralske and Stephen “X. Dream” Popkin and Ben “Face” Munves trading off bass, vocals and drums, their approach ranged from cut-throat punk slop to unhinged bluesy sleaze (the wonderfully bizarre “Streets Of New York” with its hardcore breakdowns). The guest appearance of alto saxophonist Daniel Carter on these four archival cuts recorded live at CBGB in 1986 adds an extra dose of fire to the proceedings. A regular in the groups of bassist-composer William Parker and a fixture in the New York free jazz environment since the mid-70s, his jubilant squall nudges Ralske’s wiry, feedback-drenched statements to unbridled heights. Given more room to stretch it would be interesting to hear what these players could accomplish, but the seven-inch format gives these tracks an extreme urgency, as though if one blinked the music’s gifts would be lost. Thanks are due to Minneapolis’ Roaratorio Records for releasing this snapshot (replete with Raymond Pettibon artwork) of an ecstatic DIY moment.” – Clifford Allen, Tiny Mix Tapes