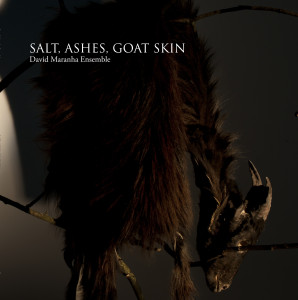 “In an everlasting process that continuously repositions and reevaluates infinity as a consciously unachievable but ultimately rewarding goal since the early 90′s, David Maranha’s music has been riding that arc with ferocity and aplomb. A unique vision that has been translating the ETERNAL in a sprawling language through countless performances, approaches and records like Marches of the New World and the Roaratorio-released classic Antarctica. Always the unsettled mind, Maranha conveys his spiraling vision towards its core with this new ensemble. Comprised of Diana Combo on drums, Filipe Felizardo on electric guitar and David himself on organ and violin, they are a speculative tour de force around animic and sensory principles of movement, stillness and reaction. Long drawn out semi-riffs feedback along the drifting textures of the violin and the organ like rock’s ultimate coda stretched into nowhere. Drums plodding in restraint, sustaining the drone-like vortex of electricity without ever reaching any sort of conclusion in four pieces that inhabit their own universe continually. As it should.” – Bruno Silva

“Sometimes a man’s just got to cut loose, and so it has been with David Maranha. The Portuguese multi-instrumentalist (organ, violin) has been exploring the sounds that escape when drones rasp against each other for some time, but recently he’s turned up the rock elements in his sound. On Sombras Incendiadas, his duo with cellist Helena Espvall, that involved the radiant amplification of savagely stroked strings, but the flow of energy reverses on this recording. Maranha, guitarist Filipe Felizardo, and drummer Diana Combo seem less unconcerned with progress or any other sort of outward-bound motion. Instead they bear down on the riffs and repeat the beats, pounding the music into a ground that’s shrinking and crumbling, drawn into a black hole core. Sure, feedback tendrils escape and swipe around like sea monster tentacles swiping hapless sailors off some old whaling vessel, but they’re inescapably drawn back into the deep. Imagine how White Light/White Heat might have sounded if Faust’s drummer had taken over the band, broken the vocal mics, and thrown out all the songs, and you’ve got a pretty good idea of what this record is like.” – Bill Meyer, Dusted

“RECOMMENDED
Portuguese composer/EAI savant David Maranha has been in the game since the early ‘90s, having collaborated with artists as diverse as Z’EV, guitarist/cellist Helena Espvall (Espers), and Dirty Beaches’ Alex Zhang Hungtai. In this lineup, alongside guitarist Felipe Filazardo and drummer Diana Combo, he explores every centimeter of the rough surface between his violin and its bow, along with a prepared organ, as guitars buzz and slash away underneath, and martial drumming pounds out the time. The scrape of Maranha’s violin bow remains the heaviest and most deliberate element of this sound, like a rusty anchor dragging across a scrapyard of a record that fits more comfortably amidst a small group of bands (Swans, Nohome, Caspar Brotzmann Massaker) than in a genre. You won’t soon forget it.” – Doug Mosurock, Still Single