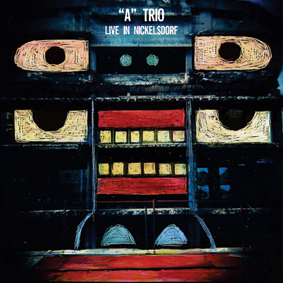 If the city of Beirut doesn’t leap to mind as a hotbed of avant-garde musical activity, listen up: since 2005, the Al Maslakh label (translation: The Slaughterhouse) has been documenting far-thinking sounds from the small but vital Lebanese scene. The “A” Trio’s first release, Music To Our Ears, was one of the most startling debuts of 2011; now, Roaratorio is proud to present their second album (and first vinyl release): Live In Nickelsdorf, recorded at the Konfrontationen Festival in 2012. While far from the first to employ extended techniques on their respective instruments, Mazen Kerbaj (trumpet), Sharif Sehnaoui (acoustic guitar), and Raed Yassin (doublebass) create a music that bears little relation to others who traffic in the same outer realms. Heavily textural, frequently perplexing, sometimes unsettling but always suffused with a provocative intelligence, this is the sound of a collective ur-mind that favors the long gesture over pointillistic strokes. Their capacity for generating aural illusions – one would be hard-pressed to identify the instrumentation as three acoustic instruments, with no electronics or overdubs whatsoever – is astounding, but it’s their skill at harnessing these uncanny tones into a consistently engaging and powerful sound-world that elevates the “A” Trio into the front rank of contemporary improvisational groups. A limited edition of 350 copies. Download coupon included.

“On a recent spin of side B, I got involved in some reading for a bit after putting this record on, and then wondered — who is that saxophonist? There is no saxophonist on this record, just as there is no golf cart engine, no collapsing crockery shelf, and no giant flossing his teeth with the rigging from a clipper ship. There are just three guys playing trumpet, acoustic guitar, and acoustic bass, almost always in a way that shows a fine disregard for the received techniques of his chosen instrument. While this LP was recorded in Austria at a jazz club, it was performed by three Lebanese musicians, born in the mid-’70s and raised into a post-year-zero-minded art scene that has seen war come and go and come around again. They know better than to rely on electricity, and they don’t care much to deal in any kind of comfort, whether it’s nice sounds or adhering to some aesthetic orthodoxy, even that of the European free improvisers they’re probably closest to in a sonic sense. There’s a lustiness to their textural explorations that reminds me of 60s free jazz, but the sounds they select bear down rather than up and out. Oh, and that saxophone? That’s just a trumpet being played through a rubber tube.” – Bill Meyer, Still Single

“Having taken their exploration of acoustic extended techniques even further on again from their 2010 debut, so little remains of the traditional sound of trumpet, guitar and double bass that it feels like the relevant traditions have been passed through a mincing machine. It’s so oppressive and frequently unnerving in its insistent and uncompromising intensity that when traditional instrument sounds do poke their heads up through the subterranean grittiness, they serve as a reminder of how remarkable the trio’s unedited, overdub-free approach really is.” – Richard Pinnell, The Wire

**** “The “A” Trio are Mazen Kerbaj on trumpet, Sharif Sehnaoui on acoustic guitar, and Raed Yassin on doublebass, three musicians well known from the Lebanese Al Maslakh label, now featuring on this limited edition LP from Roaratorio. What the trio does is amazing. They create a sonic universe well beyond the known possibilities of their instruments, and nobody (nobody!) could guess which instruments are being played if I had not already disclosed it. It is noise, it is minimal yet dense at the same time, played with a sense of urgency that is familiar to rock music, but then without the bluntness and the fixed rhythm. It sounds like sirens urging you on, to move to act to do something while at the same time stopping you in your tracks because the music (?) is spell-binding and paralysing too, taking the power out of your muscles, weakening your legs.
It is fearful. Listen to the howls of the trumpet after thirteen minutes, or to the uncanny layers of screeching sounds that end the ominous first side. The second track, on side two, start with a strange rhythmic pattern of circling bowed bass and repetitive trumpet phrases that sound like a sax, deepening the intensity of the music, moving the sounds forward in an almost unavoidable way, beyond choice. It is terrifying with intensity, raw, direct and compelling, and the finale is absolutely hypnotic in its relentless violent drive.
This is an excellent album with music that is not easy, but listeners with open ears and strong hearts will appreciate its musical quality and emotional power.” – Freejazzblog

“Live in Nickelsdorf presents a rare US-produced document of improvised music from Beirut, albeit recorded at the Nickelsdorf Konfrontationen in its namesake Austrian city. “A” Trio consists of trumpeter Mazen Kerbaj (now residing in Berlin), guitarist Sharif Sehnaoui and bassist Raed Yassin on one improvisation across two LP sides. This disc is their third full-length and first for an American label. Kerbaj is probably the best known of the three, not just for his work as an instrumentalist, but as a painter and draftsman whose work chronicles the daily life/plight of people in Beirut (sort of like a contemporary Philip Guston in multiple panels). The palette goes well beyond brass, strings and wood, employing metal objects, vibrating devices, close miking, alligator clips, hammers, alternate tunings, bells, disassembled and muted instruments. Their music is rhythmic and captivating, mostly underpinned by Yassin’s bass, which provides an obsessive bulwark of scrapes and guttural drone. Fiddled guitar, buzzing strings and torqued yelps emerge toward the record’s end, as minimalism brushes against expressionism. It’s quite difficult to determine what process is generating certain sounds – the tenor saxophone-like wallow that opens the second side seems to come from Kerbaj, but it’s hard to figure on what instrument. No matter, his sputtering brays are a brutalist commentary to spidery strings, and as his air moves, the breadth of his metallic vocabulary is both intriguing and effective. There’s quite an avant-garde scene in Beirut, apparently, and “A” Trio is just the heavy tip of the iceberg.” – Clifford Allen, Ni Kantu